On 19.12.2020 Arnis Instructor Torsten Zumpf invited his troop to the quiz evening. Nine ambitious members could not miss this chance for a merry get-together in the hard lockdown and met - quite corona compliant - via video chat.

To accumulate even more knowledge, the host invited the whole households of his Arnis protégés. So some brought their partners, others the neck roll bumblebee and others hid any fellow human beings behind switched off cameras. Torsten had brought two of his favorites with him - the silent, but nevertheless very expressive Mandy beaming into the camera, and the gleaming golden mead in the glass.

Good mood gave it in any case immediately. To keep it that way, the illustrious round was nourished by favorite local drinks. This was to ensure that the answers also delivered sufficient creativity. People laughed, drank, listened to questionable music, and at some point were urged to turn off the microphones so that the quizmaster could recite the rules he had laid down in complete and sole attention. The participants listened devoutly, even as Torsten announced that "the quizmaster always has the last word." As is so common in any good monarchy, the people took the gentleman with the mead at his word. Only later were they to complain through small peasant uprisings.

And then it started! There were four categories, which, not only concerning the martial arts, also brought the partner heads of the participants on board.

What could go wrong? The presentation, perhaps, which was made late at night with tired eyes and sweet mead in the belly and which was put through its paces by various mock tests? Of course ni..., yes, exactly the one. It hung. Frequently. And thus Torsten managed in a particularly inventive way to increase the tension of his multi-faceted quiz even more.

And so, in the living rooms at home, questions of life were asked, with which one usually did not concern oneself on an ordinary Saturday evening. I, at least, sitting on the couch, only very rarely asked myself which animals with a flying device cannot walk. You want an answer? Google does not apply.

And so they quizzed and compared and outraged. Especially when Master Zumpf dismissed an answer alternative as "Not correct!" or "Well, that's only worthy of half a point!" or "If you ask like that, that deserves more like a minus point!" People protested, groaned, and were about to paint protest posters and form wild telegram groups when the next category was already being quizzed. The protest died away and another drink was taken. And at least in the end somehow agreed that all already had its order.

Mandy, the shimmering mute figure next to Torsten with her own set-up, had the trusting task during the game of adding up all the participants' points and finally choosing the order of winners at the end. So the challenge cup will now be handed over to Paul for the time being.

But let's look back again for a moment: Is there really a difference in meaning between a hurdle and an obstacle?!?!?! 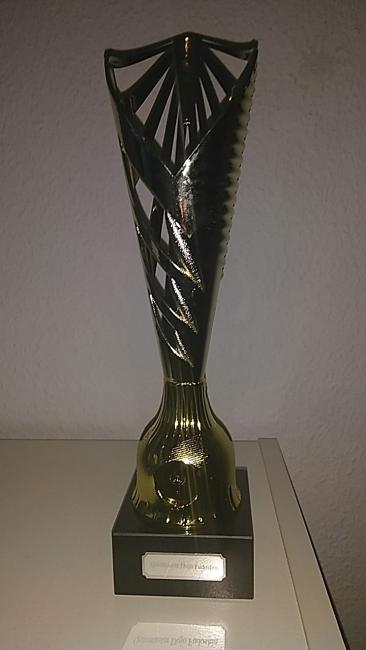 The flyer of the Dojo Fudoshin as PDF for download.